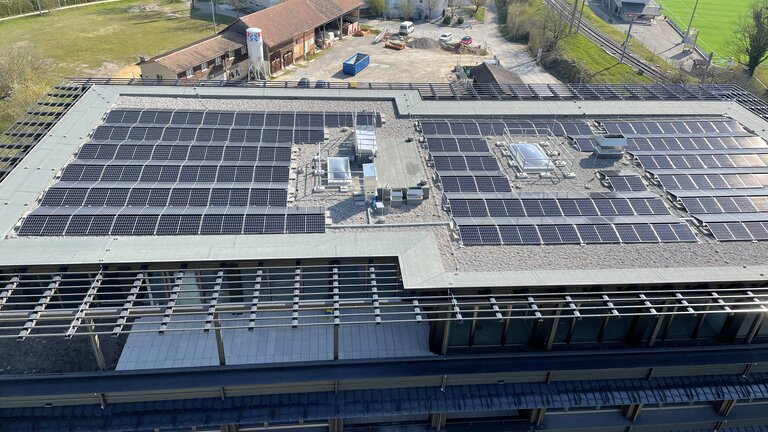 The view of the new headquarters of the EGK health insurance fund from the crane reveals many things: for example, the view of the large photovoltaic system, which comprises 136 modules, is impressive.

Per square metre, 182 kilowatt hours of electricity can be produced. The future annual yield of around 60,000 kilowatt hours is roughly equivalent to the annual consumption of around 20 three-person households. And for the experts among you: Installed was the power of 71.78 kWp (kilowatt peak), which measures the maximum power of a photovoltaic system in kilowatts.

Almost all photovoltaic systems also feed their electricity into the public grid. By connecting to a large interconnected grid, it can be ensured that at any given time there are enough consumers who can use the solar electricity immediately. In this case, there is no need for local intermediate storage. For the profitability of a photovoltaic system today, the self-consumption of the solar electricity is usually the decisive factor. This means that the more solar power that can be used directly on site at the time of production, the sooner such a system also pays off financially.

But the view of the surroundings is not to be sneezed at either. Particularly worth seeing is the floral stone slab pattern, which also indicates EGK's strong connection to nature. After all, the speciality of EGK supplementary insurance is free access to natural medicine.